1. He loves to take a day trip (Daffodil Hill, family graves, Marin Cheese…)
2. He loves to travel off the beaten path (a side trip to a toxic waste dump for example)
3. He grew a moustache in 1986 because I asked him to.
4. He would take me to Sears for fresh popcorn & to see the giant Winnie the Pooh
5. Every day he delivers fresh cups of coffee to my mom.
6. His feelings get hurt if you don’t ask him to take you to the airport at 4AM
7. He still won’t tell me the punch line to the joke about the two Mexicans and the nun.
8. He will tell grandson #1 inappropriate un-edited jokes.
9. When mom told him I was gay he showed up at my office out of the blue to take me to lunch “just because”.
10. He’ll drop whatever he’s doing to help us out.
11. When I was 6 he told me to whip my mom with a licorice whip – I did. (bad idea by the way)
12. During high school I once forgot to put on my bra. He drove back to school to deliver it sealed in a brown paper bag.
13. He brought me breakfast in bed all through middle & high school.
14. He drove me to school everyday.
15. He can pack more camping equipment into a car for a two day trip than anyone I know.
16. I still can’t beat him in dominoes.
17. Finger off the checker is a hard & fast rule.
18. He makes the best tacos in the world.
19. He can tell you every subplot to any Seinfeld episode within 2 minutes of the start.
20. He should have been on Jeopardy! Never challenge him in a game of Trivial Pursuit – you’ll lose.
21. Does anyone need a Y2K pantry full of SPAM?
22. Yes, he still has a Y2K pantry.
23. If you are hungry and in a strange town he can tell you a restaurant to go to.
24. He watched almost every episode of Santa Barbara with me.
25. He still asks about Cruz & Eden.
26. He’ll welcome anyone into his life if they are important in yours.
27. He makes delicious & strong fresh strawberry daiquiris.
28. His sweet little love pats (forceful enough to knock over small children)
29. He still asks me to sit on his lap (I haven’t in 15 years)
30. He beat cancer over 10 years ago.
31. Many of my friends envy / admire his relationship with my mom.
32. He doesn’t throw a half-ass party.
33. He won’t drink crappy beer (the same can’t be said for wine)
34. Beware of the Yuba Monster!
35. He may say “don’t bring that dog into this house” but he doesn’t mean it.
36. He can’t get through a toast or grace without choking up.
37. He named his robe “Pierre”
38. He once bought & wore a woman’s cardigan sweater.
39. He travels with a bar and a set of dominoes.
40. In his mind the sun is always over the yardarm.
41. He goes to the annual Cowboy Poetry festival.
42. He attended almost every sporting event I played in during High School.
43. He still shows up to my over30 soccer games.
44. For this year I’m half his age.
45. He’s the cutest old fart in a seersucker suit & straw hat.
46. If you sell it with a Cal logo he’ll buy it.
47. He learned that I got into Cal Poly and decorated the front steps with yellow & white flowers.
48. Letting me drive on Pismo Beach when I was 10 or 11
49. He reads Jane’s blog everyday.
50. He can’t avoid a thrift store deal.
51. He might love dogs more than I do.
52. He’s the antithesis of my mother’s paranoia.
53. There are no rules above 5,000ft. (I’m not sure there are rules below 5K either)
54. If you express an interest in something he’ll send you books & articles on it for years.
55. He hates it that #2 son & family live so far away.
56. Beware of the Shoe Monster!
57. He can tell anyone a story about anything.
58. The day he gave a homeless man a bag of groceries for admiring his terrier.
59. He bought my mom a man’s robe for Christmas with the justification that she’s the size of a small man.
60. Spontaneous hugs.
61. He still calls the VCR the “ATM”.
62. He mows the lawn barefoot.
63. Even though I don’t work there he always asks me “how are things at the Cathedral?”
64. If you have a favorite food or drink he knows what store has it on sale.
65. If you think you left your iron plugged in he’ll drive up to your house to check on it. He won’t tell mom about it either.
66. He reads cookbooks like most people read a novel (before bed, on a trip… I’ve never seen him with one in the kitchen)
67. If I don’t get at least one call from him each day I worry that something is wrong.
68. He loves my mom.
69. He loves his family.
70. He’s the best example of a friend.
Posted by SDCrawford at 1:20 PM No comments: 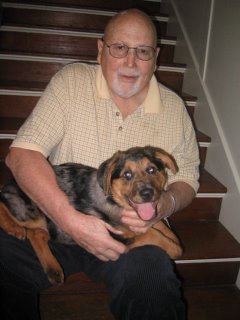 Posted by SDCrawford at 10:09 AM No comments: 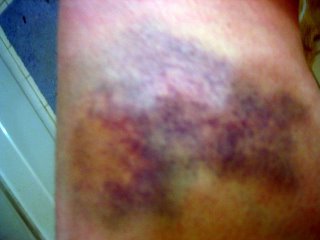 This is a bruise on my thigh from a collision in a "friendly" game last week. Notice the bruise wraps around my entire thigh. It appears to be getting bigger over time. Yes - Ouch!
Posted by SDCrawford at 9:50 AM 1 comment:

Sometimes they hit so close to home

click on the cartoon for a bigger screen shot
Posted by SDCrawford at 1:44 PM 2 comments:

Click the above link for more information on family farms and what you can do to help...
It's time for a change in U.S. agriculture. I am writing to ask you to authorize strong federal programs supporting new agricultural priorities as you craft the next farm bill. We need to reward creative, sustainable farmers for their efforts as responsible stewards of the land and encourage them to move in new directions.

In previous farm bills, Congress has poured billions of dollars into programs that favored large-scale industrialized agriculture and encouraged the overproduction of commodity crops. I encourage you to shift our priorities by funding programs that encourage innovation, ensure healthy food, protect our environment, and revitalize rural economies.

Please reward a more sensible and sustainable future for agriculture by:

* Renewing and shoring up the Conservation Security Program (CSP).

* Providing assistance to meat producers who employ a more responsible approach to antibiotic use in animal agriculture and to producers seeking to transition toward more sustainable use.

* Supporting reasonable payment limitations in the farm bill's commodity title, such as a cap of no more than $250,000 per year.

Through these and other measures, Congress can support a forward-looking, economically robust farm bill that will protect the livelihoods of America's innovative small to mid-size farmers, along with our health and the environment."
Posted by SDCrawford at 9:14 AM No comments:

I was only 13 when this was performed at the Olympics and I am still in awe of the beauty in this. Watch & enjoy.
Posted by SDCrawford at 9:33 PM 1 comment:

She's ready for her closeup 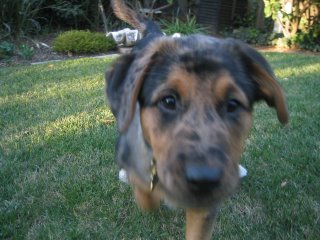 Posted by SDCrawford at 8:16 PM No comments:

Dog is my co-pilot 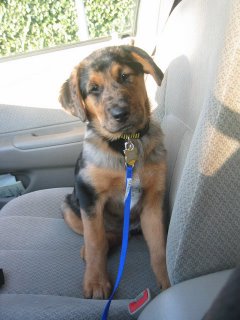 Posted by SDCrawford at 8:14 PM No comments:

Why do I have dogs?

Who else greets you each & every time you come home with such joy & affection!
Posted by SDCrawford at 9:45 AM No comments: 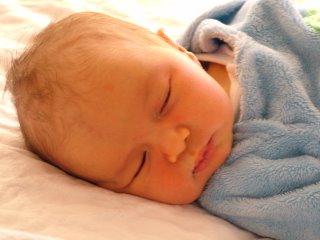 Not much really. A week ago I had my first physical exam in at least two years. The dr. asked when I had my last tetnus shot... hmm.... I can't remember one since high school. Maybe since I spend at least a week each summer at camp or on some labor intensive mission trip it would be a good idea to re-up. So I took a shot to the arm of tetnus/diptheria/whooping cough vaccine cocktail.

Combine being sick with having a 12 week old puppy who sleeps no more than 4hrs in a row - I'm not getting a lot of rest.

Jane fried the computer at home so we are without internet entertainment for her. We are managing to survive somehow.

That's all the news of the moment. What's new with you?
Posted by SDCrawford at 3:54 PM 1 comment:

Brokeback to the Future

Brilliant. Just brilliant.
Posted by SDCrawford at 10:22 AM 1 comment: 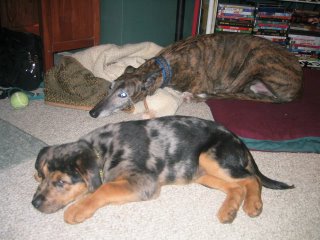 They are working it out. Someday...

Posted by SDCrawford at 6:28 AM No comments: 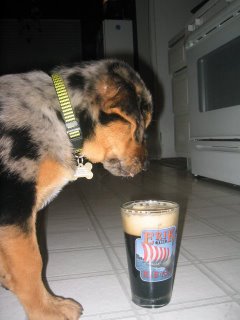 There she is admiring a delicious stout. A girl with impecible taste. God bless her little heart.

Four Movies I can watch over and over:
When Harry Met Sally
Grease
Shag
Princess Bride

Four places I would rather be right now:
At home with my new puppy
Wine tasting in Paso Robles or Healdsburg
Camping lakeside
Relaxing at Jack’s farm.

If you have a dogster page please add to our pup pals list.
Posted by SDCrawford at 9:46 AM No comments: 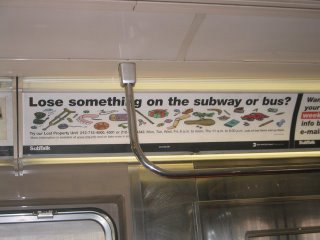 Yes... items posted for the MTA Lost & Found include a Cobra in strike position, the upper set of dentures and a 1930s era prosthetic leg just to point out a few of the highlights.

We had a great time in NYC. Here's what we did in the day I arrived on the red-eye:
1) nap
2) subway to Coney Island
3) lunch at Nathan's
4) walk Coney Island Boardwalk (closed for the season but interesting)
5) NYC Aquarium
6) walked the beach looking for sea-glass only to find sharp shards of glass and a sock.
7) enjoyed Chinatown (and it was Chinese New Years too!)
8) walked Little Italy and rested at italian cafe to indulge w/ scoos of gelato & coffee
9) walked Grenwich Village
10) walked Chelsea
11) had dinner
12) walked to hotel
13) walked from hotel on 28th to Times Square (yes, on 42nd)
14) found Irish bar where Jane's fav. rebel Irish Band (Black 47) was playing.

So I took red-eye flight to NYC and WALKED all major neighborhoods in mid-town all day long and still managed to enjoy a rock show at 11PM.

My feet haven't forgiven me yet.

Posted by SDCrawford at 9:32 PM No comments: 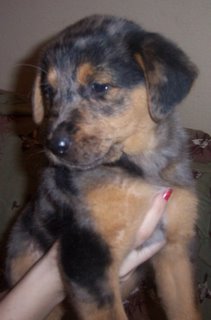 By noon on Friday I will have my hands full. We decided on the name Granite because of her unique markings. She looks more like marble but that didn't sound like something I could call arcoss the dog park. And a nickname for her might be Granny. Come by & meet her. We are very excited. A new puppy! Yay!
Posted by SDCrawford at 11:34 AM 2 comments: