I Can't Wait for HSM3

Posted by SDCrawford at 9:00 AM No comments:

I would be Trough Gutted Palin. Want to know your Sarah Palin Baby Name?
Posted by SDCrawford at 9:49 AM No comments:

This just arrived by email, I don't know who to give credit to. I'm sure your in-box will get it soon.

I'm a little confused. Let me see if I have this straight.....

* If you grow up in Hawaii, raised by your grandparents, you're "exotic, different."

* Grow up in Alaska eating mooseburgers, a quintessential American story.

* If your name is Barack you're a radical, unpatriotic Muslim.

* Name your kids Willow, Trig and Track, you're a maverick.

* Graduate from Harvard law School and you are unstable.

* If you spend 3 years as a brilliant community organizer, become the first black President of the Harvard Law Review, create a voter registration drive that registers 150,000 new voters, spend 12 years as a Constitutional Law professor, spend 8 years as a State Senator representing a district with over 750,000 people, become chairman of the state Senate's Health and Human Services committee, spend 4 years in the United States Senate representing a state of 13 million people while sponsoring 131 bills and serving on the Foreign Affairs, Environment and Public Works and Veteran's Affairs committees, you don't have any real leadership experience.

* If your total resume is: local weather lady, 4 years on the city council and 6 years as the mayor of a town with less than 9,000 people, 20 months as the governor of a state with only 650,000 people, then you're qualified to become the country's second highest ranking executive.

* If you have been married to the same woman for 19 years while raising 2 beautiful daughters, all within Protestant churches, you're not a real Christian.

* If you cheated on your first wife with a rich heiress, and left your disfigured wife and married the heiress the next month, you're a Christian.

* If you teach responsible, age appropriate sex education, including the proper use of birth control, you are eroding the fiber of society.

* If , while governor, you staunchly advocate abstinence only, with no other option in sex education in your state's school system while your unwed teen daughter ends up pregnant , you're very
responsible.

* If your wife is a Harvard graduate laywer who gave up a position in a prestigious law firm to work for the betterment of her inner city community, then gave that up to raise a family, your family's values don't represent America's.

* If you're husband is nicknamed "First Dude", with at least one DWI conviction and no college education, who didn't register to vote until age 25 and once was a member of a group that advocated the secession of Alaska from the USA, your family is extremely admirable.

OK, much clearer now.
Posted by SDCrawford at 11:19 AM No comments: 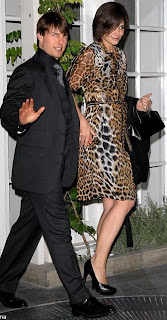 Before he went crazy I had a mad crush on Tom Cruise. He was #1 on my celebrity list. If only he kept his mouth shut and let his big nose & crooked smile work their magic. Oh, and the whole Scientology thing is whack-a-doo too.

So, anyway... I finally went in for my annual grooming - aka haircut. I asked for "just above the shoulders with some layers so it's not a blunt stick straight bob". I love what Stacey did to my hair but did she have to say, "it's a little longer version of the Katie Holmes"

Seriously. I got the trendy celebrity cut of the season. Now if only I could rock a leopard print dress.
Posted by SDCrawford at 8:36 AM 1 comment: