I decided to not drink between Halloween & Thanksgiving. I stuck to it pretty good until the last few days. Without booze in the diet I lost another five lbs. Still got a few more fivers to go... slowly but surely we are slimming down.

When we started the official strict South Beach I thought it was something we could do for the long term. It turns out I was right. It's not so hard to keep pasta, white rice and potatoes out of our meals. When I have a carb craving I just make sure to eat whole grain products.

If only they made a whole grain wine or beer. Then I'd be content!
Posted by SDCrawford at 10:47 AM No comments:

Set Your DVR for Christmas Specials

- "Rudolph the Red-Nosed Reindeer," 8 p.m. Wednesday, Nov. 30, CBS. A shy reindeer battles the Abominable Snowmonster and finds that his vibrantly colored nose makes him a hero, not a misfit, when Santa Claus needs a guiding light.

- "Santa Claus is Comin' to Town," 8 p.m. Friday, Dec. 2, ABC. Fred Astaire was the narrator for this 1970 tale about how Kris Kringle (Mickey Rooney) overcomes a ban on toys in his native Sombertown and ends up becoming Santa Claus, the world's biggest toy distributor.

- "Dr. Seuss' How the Grinch Stole Christmas," 8:30 p.m. Saturday, Dec. 10, ABC. Jim Carrey stars as the unpopular Grinch in the film based on the Dr. Seuss book. Christine Baranski and Jeffrey Tambor co-star.

- "The Santa Clause," 8 p.m. Thursday, Dec. 15, ABC. Tim Allen stars as a man who becomes the unwilling successor to Santa Claus and has to quickly learn the ropes. Wendy Crewson, David Krumholtz and Peter Boyle co-star.

Posted by SDCrawford at 3:05 PM No comments:

It's fun just to watch the little guys go about their day, enjoying the show, sledding & skating... then I shake them up a bit.

Have fun!
Posted by SDCrawford at 1:29 PM No comments: 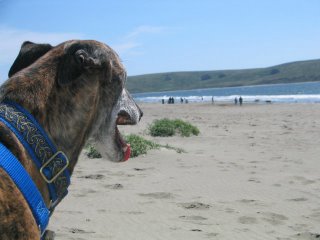 From our trip last May to Dillon Beach. This was one of the first unfenced places Timm has been able to run off-leash. He loved it. Freedom.

Posted by SDCrawford at 8:43 PM No comments: 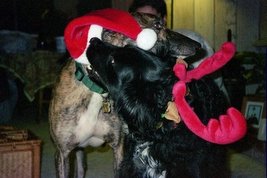 This was the best pic. in many attempts to capture the boys dressed up for the holidays. I guess we'll never get a good shot of them for a Christmas card. Oh well. We had fun.

Posted by SDCrawford at 10:40 AM No comments: 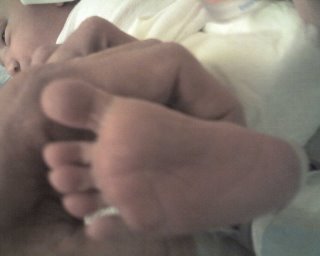 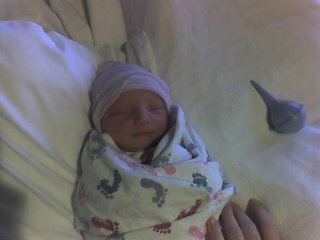 Scrunched up face and all five toes! I look forward to tormenting you as you grow up.
Posted by SDCrawford at 9:14 AM No comments:

Apparently a new winery & tasting room is opening up in the heart of Oakland. I think I might have to pay them a visit.
Posted by SDCrawford at 2:55 PM No comments:

Chalk One Up for the Catholics

The Vatican's chief astronomer said Friday that "intelligent design" isn't science and doesn't belong in science classrooms, the latest high-ranking Roman Catholic official to enter the evolution debate in the United States.... (click above link for full article)
Posted by SDCrawford at 9:46 AM No comments:

Let your voice be heard!

The ONE Campaign: "This week, Congress will decide how much America will contribute toward an important international effort called the Global Fund to Fight AIDS, TB and Malaria.

Let’s keep up the positive pressure: Please email Congress today and ask their support for $100 million in the Labor-HHS Appropriations Bill for the Global Fund-- an effort that fights back against three killer diseases and encourages other countries to do their share. "

To make sure your voice is heard, ONE has set up a toll-free number that will connect you directly to your Representatives’ office in Washington, DC.

Together, these three preventable and treatable diseases kill 6 million people each year. Together, we can change that - as ONE, we can make the difference.
Posted by SDCrawford at 11:55 AM No comments:

A few choice descriptions from the website:
"With a slight thickness to its body, this product also feels somewhat like cereal in your mouth."

"The greenish color is probably our biggest issue with this product as green colored milk is typically a sign of some sort of problem."

"This beverage packs sweet, artificial-fruityness and a slightly thick, cereal-like consistency into an 11 ounce can."

My lips now look normal but they continue to have a poison oak like itch that seems to be spreading. Where do I itch today? The bridge of my nose, my right nostril, my left upper eye-lid. I also have an itchy red rash on each side of my neck (front) and across my neck (back) from shoulder to shoulder.

No, I have not changed body soaps, lotions or laundry detergents. What could it be?

Help... please. I can't stand it for much longer.
Posted by SDCrawford at 3:01 PM No comments:

Click Me and enjoy a little seasonal entertainment. I've received this by email or IM at least 10 times. Now I share it with you.
Posted by SDCrawford at 9:31 AM No comments:

A meme making its way around the Internet, discovered during a visit to sarahlaughed.net: you Google your name and the word "needs," and blog the top ten hits that come up. So, according to Google, this is what I need:

Sarah needs someone who can escort her from port to port

Sarah needs to get her life back and establish herself as the person in charge!

Sarah needs to set up her experiment 4

Apparently I only need 9 things!
Posted by SDCrawford at 2:19 PM No comments:

Health: "An itchy rash develops and progresses into fluid-filled blisters that itch and ooze. Your dermatologist calls this an acute allergic contact dermatitis. Typically, symptoms develop several hours after exposure, build to a peak within two to five days, and clear up in about three weeks."

Jane thinks I may have this. On my lips. My top lip is currently about triple in size and is covered in oozing little blisters.

I have a Dr. appt at noon to see if internet diagnosis is correct, hopefully prescribe big drugs and make it go away. I'm not pretty. Jane took a picture this AM... We'll see if I can figure out how to get shots from camera into computer.

Cheers!
Posted by SDCrawford at 9:18 AM No comments: 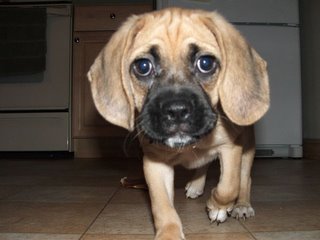 I learned of this new designer breed from Jake Gyllenhall on The Today Show. They are called "pocket boxers". I'm not sure why anyone would cross a Pug with a Beagle but here they are. I introduce you to the Puggle.
Posted by SDCrawford at 2:08 PM No comments: 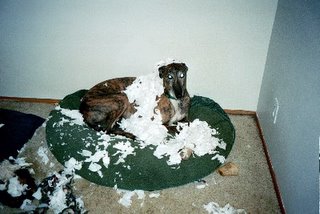 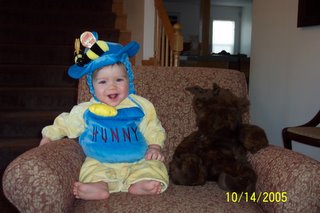 Hi! My name is RJ and I'm a hunny pot. I like to smile and drool. I did not go out for halloween because it's a pagan holiday and my parents are very religious... ok really I was just in a bad mood. Do you see those teeth in my face? They hurt. And I don't like wearing this stupid outfit. Mommy just made me take a picture to show all her friends how cute I am. See, I'm cute. Gotta go eat some candy....
Posted by SDCrawford at 2:26 PM No comments: